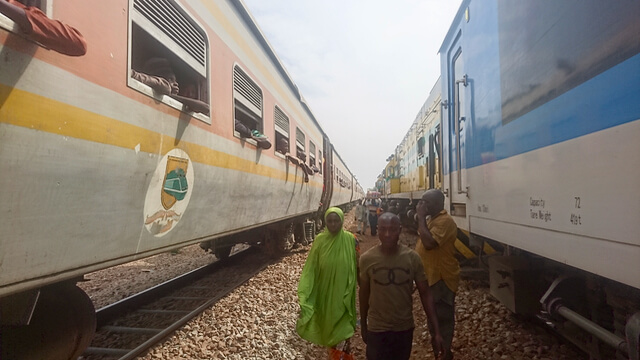 After the military ops to board, took a look around the coach interior and it was rather nice, above expectations.

Chairs were comfy, could recline real low without disturbing the person behind you and the drop down tables in front work. Good lighting you can read by, a couple of AC 220V outlets near the middle, most in working order, overhead space to store your luggage. Hmmm, not bad at all.

Moving thru Lagos, it was hard to locate oneself in space, perspective matters a lot and seeing places from inside the railway right of way really threw us off, are we in Ikeja or is that still Oshodi? The Airport was a good landmark but after that, it was time to lean back a bit and look around.

Exploring backwards, the economy cabin was jammed with humans and goods, I retreated back to the bar which had not started up yet. Met two chaps and one told me he was still drunk! No wonder my questions only got back smiles. I was trying to be smart and book cold water to be reserved for me.

Nice looking sleeper cabins but no AC so more of a bakery. Filled up anyway. These were not advertised so how come the sleeper coaches are all full?. I poked around a bit then retreated back to the comfort of ‘First Class’. Yep, living large on my 3,700 naira ticket.

First major out of Lagos stop was at Lafenwa, Abeokuta. Quick dash down to get water, easy plan but hard to execute. I left the tracks to the nearby shops and hunted till I got a cold bottle, rush back, then added fried groundnuts in shell. That was m main meal for the trip!

Three blasts and then we pulled out. Then darkness came, the ride was smooth, a lot of gisting in the cabin as people got to know each other more and we had our little group. A bit later, I did the maths on speed and it looked like a long journey ahead! Make it fun, so we took bets on arrival time and wrote them down. Worst case arrival at Kaduna was an estimated journey time of 30hrs! The scary part was it came from a Rail employee!

Just before Ibadan, the chap in front of me mentioned he had not seen his seat mate. Speculation time. The favoured solution was that he was holed up in economy with a new found love, did not make sense though. Police was called and we checked his luggage just in case. Then the news came in.

Someone matching his description died at Abeokuta. Was he the one or hopefully some random stranger. No such luck, we got the confirmation at Ibadan. It was our chap. He went to pray, missed the train takeoff and tried to jump on board, slip, felled, hit his head.
Couch was sombre except for the kids who still played on as kids do. His belongings were taken off by the Police at Ibadan.

Osogbo came by but not without incident, a tree fell across the tracks after Ede, the front locomotive pushed it out of the way but there was talk that we could have derailed or stuck. Good thing I have my go cooler and a stash of fried groundnuts as reserves for emergency!

Nice market at Osogbo, you can get mints here to fight morning breath, I hope everyone got some!

Offa, refuled point, took more than an hour, just before Ilorin, I drifted off to sleep, it was about 0430 and some early sleepers had woken up by then.

I came back to life just before Jebba early in the morning, train was crawling along, no need to ask reason for slow speed as we could see ghost and carcasses of coaches by the side. Huge industrial place – Jebba Paper Mill – just before the Jebba station. One of those dead industries that the government keeps funding and dumping money into year after year. It has been bought over and should be functional soon.

Nice views crossing the River Niger up into Niger State and onwards to Mokwa, where we had another long wait for refueling or locomotive change out.

The 6pm arrival at Kaduna was now looking optimistic by the time we left Mokwa behind. I had stocked up on extra groundnuts and more water.

Lots and lots of farmland and nice views from the window. Onwards we rushed (at 50km/hr) to Minna……

Traveling by Train from Lagos to Kaduna pt3