Is the Nigeria Railway system still working? One way to find out, take a train from Iddo terminal in Lagos to Kaduna 905 km as the train travels up north. The last time I was on the train in Nigeria was in 1988, an epic 18hrs of suffering – standing between rail cars from Zaria to Ilorin under the heat, dust, cold, then rain. Things should have improved. Time to find out.

Off to the Iddo Terminus at Lagos to get the rail timetable, attempts to get reliable information from the Nigeria Railway website at nrc.gov.ng was, to put it mildly, frustrating and confusing. The site is a mixture of 90s web design with the usual 3rd world government obfuscation and total lack of concern about public or customer opinion. There was a lot of stuff there, not just anything relating to the train service or timetable. 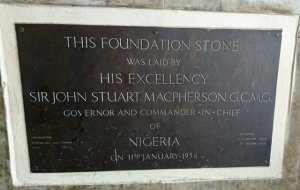 I walked around the terminus to get a feel of the place: dirty, not too smelly. Ticket counter was closed but the timetable was on a board. I finally tracked down someone who knew the departure days for the express train to Kano (which passes through Kaduna). Friday is the departure day.

No ticket sales before 10am on departure day, and I was told the first class sleeper had to be booked the Monday before and paid for on the day of departure.

Friday rolls around and I head down to the terminus. There is only a short queue for 1st class tickets but the terminal building is packed with people jammed around the entrance to the departure area. 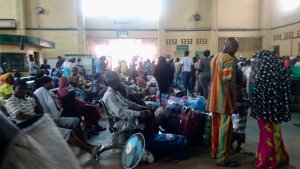 Hot, humid and loud. The wait starts. Turns out there was no information on 1st class coach availability, what? I thought there were several coaches, nope, just one for the day and it had air-conditioning problems and it was being fixed. No one was talking to us but some scraps of info coming out indicated it may not be fixed in time for the 12 noon scheduled departure.

Its midday and still no sign of ticket sales, and no train departure either, turns out the Jehovah Witness track seller at the station had told one of the chaps on the queue that trains usually leave at about 2pm, almost always!

Waiting for the tickets showed an anomaly in space-time, the queue was short in length -not more than 6 people in front of me- but super long in time, more than 4 hours later, we had not moved even one space.

Spoke to the people on the queue and the surprising thing was that more than 90% were travelling by train for the first time ever!

Just to experience it and check out another form of moving around, made me happy, people are still exploring and having fun even in this dire times.

Queueing for tickets Sale not on yet Lagos terminus

First class ticket sales started after 2 pm, big crush as everyone wanted the ticket immediately, we finally got some order restored and ticket in hand, we were told the train was about to leave. Quick, snap, backpack cinched up and we ran down to the first class coach, too far away so on we hopped to the middle coach and started forcing our way down.

Turned out the blast was just a warning so there was time to take one last leak before we moved out.

325 pm and the journey starts!

Finally got a ticket